Since early June, floods have severely impacted large areas of Southern China, primarily around the Yangtze basin, which extended to central and Eastern China during July. These floods have been described as the worst since 1998, according to official news reports. They had affected over 54 million people in 27 provinces and have impacted different industries, including the pig industry.

Some of the effects of floods on the pig industry include new cases of African Swine Fever. Heavy rains and floods facilitate the spread of ASF outbreaks, as farmers in many occasions bury pigs who die from the disease, and the rains and floods could help transport the virus in the soil across the territory, potentially infecting other farms and areas. These new outbreaks, even if not officially reported, could be a big setback for China’s goal of replenishing pork supplies.

ASF Outbreaks in China per month 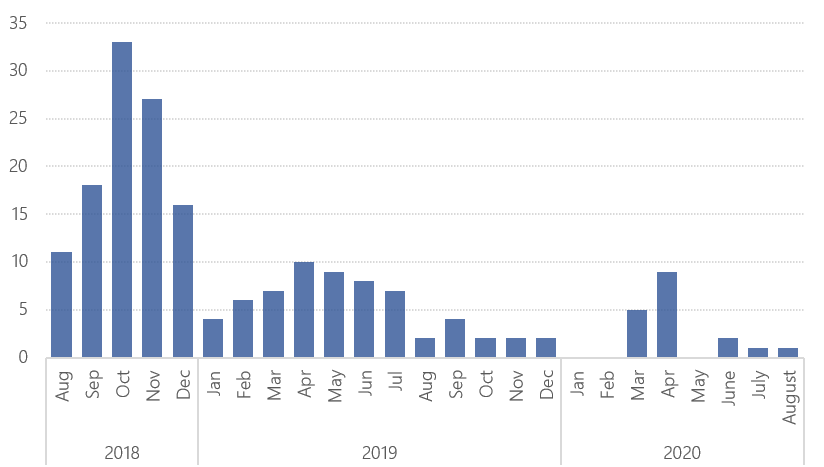 Source: Eibens with data from OIE

Official reports of African Swine Fever outbreaks have declined considerably in May, June and July after a peak during March and April. There are currently six ongoing outbreaks in Chinese farms, one ongoing wild boar outbreak and nine backyard outbreaks. Both outbreaks reported in June were in farms, and those reported in July and August are backyard outbreaks. However, there are news about outbreaks happening in June and July that have not been officially reported yet. These are mainly related to the heavy rains and floods taking place in several provinces across China.

The effects of floods in the industry extend further than ASF outbreaks, as they also have consequences in logistics, transportation, and damage to industrial buildings and farms. Moreover, adverse weather conditions, including floods but also draught affecting other regions of the country, influence cereal prices and reserves, which also condition the evolution of pork prices, rising them in China and benefiting pork imports.

Live hog prices have been increasing throughout China since June, partly due to the reactivation of the economy after COVID-19, which pushes pork demand, and partly due to the floods and other factors heavily affecting hog supply and cereal prices. When analysing hog prices per province, those along the Yangtze basin most affected by the heavy rains and floods show higher price increments between June and July.

As shown in the map, provinces affected by the floods and heavy rains like Zhejiang, Fujian, Guizhou and the municipality of Chongqing, among others, show higher prices in July, when compared to the previous month. 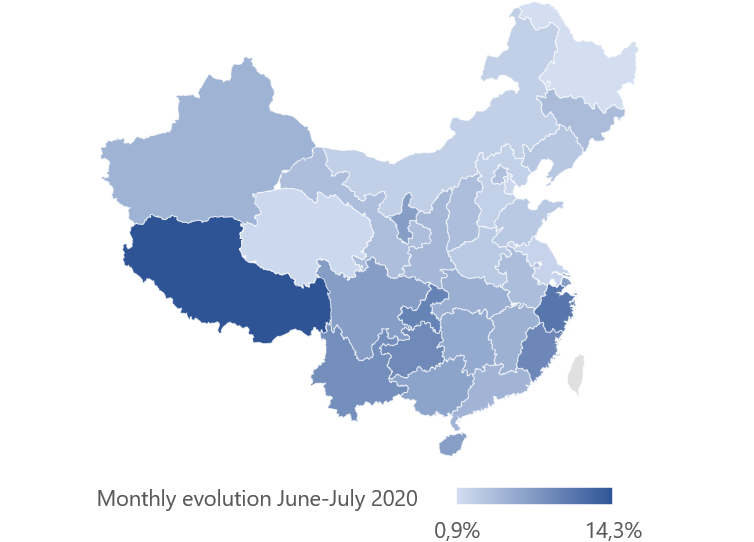 These adverse weather conditions and all the consequences, together with the current COVID-19 crisis, tightens the Chinese pork supply even further. China’s pork production fell for the seventh consecutive quarter in the April-June period. Q2 pork output fell 4.7% compared with the same period in 2019, although it grew slightly when compared to the previous quarter.

Overall, pork imports have been greatly benefitted by these tight national supply conditions, which are expected to improve slowly, but not to fully recover until 2022, according to the China Agricultural Outlook (2020-2029). Pork output should recover in due course with the sow herd growing. Data from the National Bureau of Statistics shows that the sow herd grew 5.4% in the first half of the year, but new ASF outbreaks could slow the recovery ad delay the expected date estimated by the Agricultural Outlook.