Chinese average national wholesale pork prices (“three-way cross breed”) were trending down since August, when they peaked at 52.25 yuan per kilogram following a recovery on the supply and demand balance and efforts from the Chinese authorities releasing frozen reserves. October and November saw an average price reduction of over 7% and 8% MoM respectively, and the first YoY price fall since February 2019. 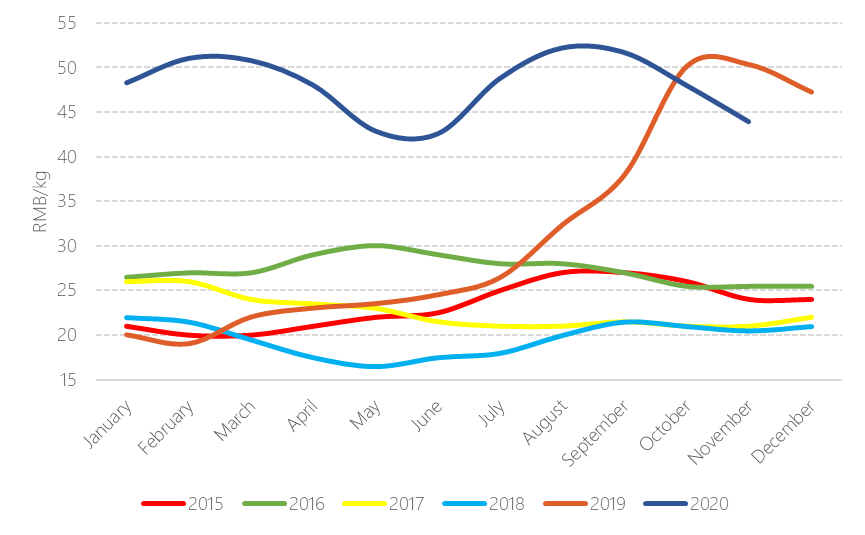 Despite this downward trend, the first weeks of December have seen wholesale prices rising again. 2020 Chinese New Year prices were over double the average wholesale price from previous years, and the latest increase has created concerns over high pork prices again around the festivities.

Industry analysts from the pig-industry portal Soozhu indicate that the current uptrend is nothing more than the fluctuations of the seasonal consumption peak season. They believe that the main reason behind this rebound is that the Southwest of the country entered the traditional bacon production season in late November, and pork consumption gradually entered the peak period, driving up prices.

In general, the number of live pigs that Chinese farmers are sending to slaughter has been increasing. According to official statistics, in the week ending on December 5, the price of a piglet was 84 yuan/kg, down from 116 yuan/kg at the end of September, due to the increased supply.

In coming months, considering the recovery of the herd, the yearly increase of pork imports, consumer demand and other factors, pork supply during the Chinese New Year is expected to grow by about 30% year-on-year, and the average price will be lower than in the same period last year.

Expectations for the medium and long term are that the supply of live pigs will continue to increase next year, the price of live pigs will fall, and the national wholesale price of pork will follow suit to adjust to more conventional pork price cycles.