Since the first recorded African Swine Fever case in the country in August 2018, China’s pig herd has been severely decimated. During 2020, with fewer outbreaks, the Chinese government has been trying to push for the rapid recovery of the country’s pig population.

ASF Outbreaks in China per month 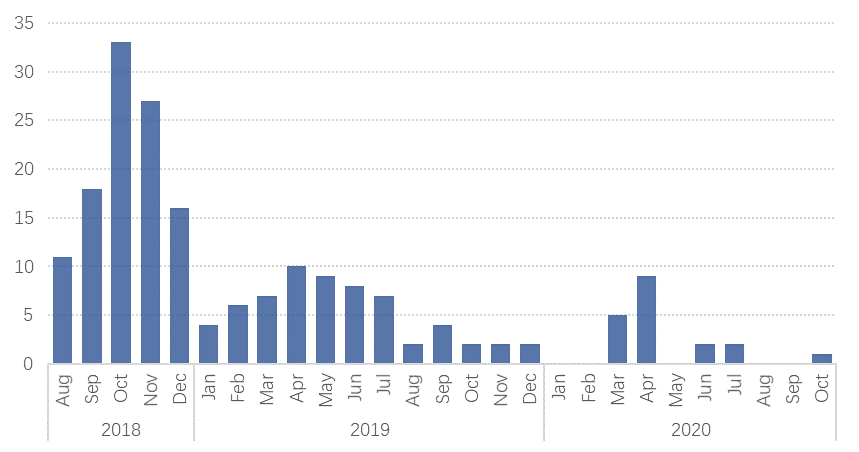 Source: Eibens with data from OIE

Analysts estimate that in mid-2019 China was down 60% in the number of breeding sows, with a consequence of the pork output falling for seven consecutive quarters up to July 2020.

The government, worried about food supply and food price inflation, has taken a wide variety of measures in their efforts towards herd recovery. This includes the investment of several billion yuan for the restocking, construction and expansion of pig farms, as well as the move by China’s banking regulator to develop pilot programs that use live hogs as collateral for loans.

The effort from the Chinese government has led to the construction and expansion of over 15,000 swine facilities, according to reports by the Ministry of Agriculture and Rural Affairs. During the second half of 2020, the Ministry estimates that 120 million head of the current herd can be attributed to new capacity built during this period and that the number will continue to grow heading into 2021.

As a result, hog and sow herd numbers have grown steadily during the past year, with month-on-month growth since the beginning of 2020 and year-on-year increments since July, both in hogs and breeding sows numbers. According to Hang Changfu, the Minister of Agriculture, on October 10th, the number of live pigs and sows in the country was 80% restored to pre-ASF levels.

However, herd recovery does not imply the immediate restoring of pork output due to the characteristics of the new Chinese sow herd. It is estimated that around 50% of the new sows are “three-way cross” breed, which carry genetic characteristics normally sought after for meat production, not for breeding. These genetic treats include less fat and smaller litters, up to five less piglets per sow in a year. Therefore, with the efficiency of the new herd below average, pork output will take longer to recover, with estimations ranging until the end of 2021. Moreover, having less fat has a negative impact in milk production for the piglets, so farmers will need to pay close attention to their feeding to obtain profitable litters.

According to official sources, the new ASF outbreak in a truck illegally carrying pigs near Chongqing has been controlled fast, including disinfection and controls on all pig transport along the route that the truck had followed, and will not have a great impact in herd recovery.