From January to late September, a total of 590,000 tons of frozen pork reserves have been released into the market, divided in 32 batches, aiming at controlling the pork price. In comparison with the full year of 2019, the released volume in the first eight months of 2020 shows an increase of over 280%. The last release was before the Golden Week, in which the Chinese government released 20,000 tons of frozen pork reserves in with the aim to lower the prices ahead of the national holidays, a common pork consumption peak.

The ban on dozens of exporting companies due to COVID-19 together with the recent ban on German imports following the ASF cases were expected to tighten supply even further, pushing prices up. However, September has seen a slight fall on national wholesale prices, as other countries have taken advantage of Germany’s share, and local demand has not been as high as regularly during the third quarter.

Overall, although supply remains tight and demand has increased in the second half of the year following the reopening of schools and businesses across China, the Chinese consumer has further incorporated other proteins in their diet, keeping overall pork demand for 2020 below average. 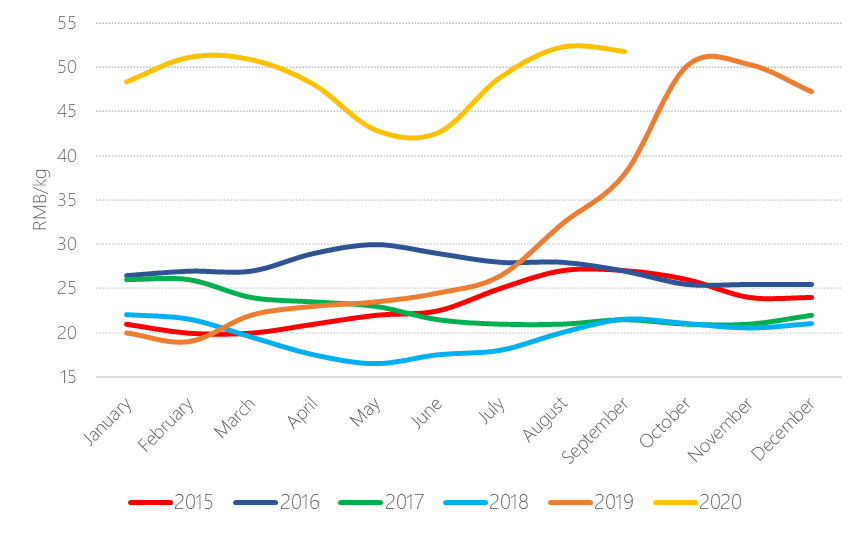 Regarding live pig prices, with the slight recovery of the pig herd in the last months, farmers have incurred into some panic selling, expecting a drop in profits from a larger supply, leading live pig prices to fall across all Chinese provinces, however, they are still around 23% higher in average than during the same month last year. 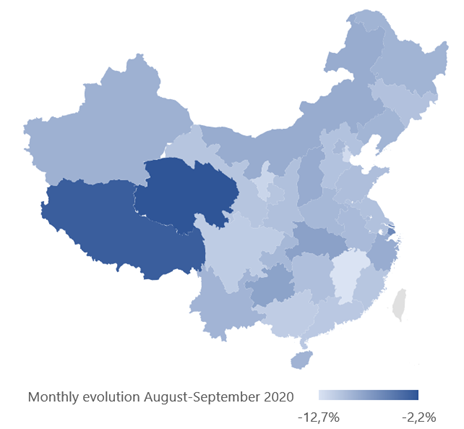 While live hog and pork prices have come down recently, piglet prices remain high at around 100 RMB/kg (1700 – 2000 RMB per head), indicating that the herd expansion is still growing.