China imported 4.39 million tonnes of pork meat and 1.34 million tonnes of offal in 2020, with a value of 12.04 billion USD and 2.82 billion USD respectively, customs data showed earlier this year. This record imports took place as the world’s biggest consumer of pork stocked up after a plunge in its pork output due to the effect of African Swine Fever, and was combined with a record import of grains, linked to the intense efforts put on herd recovery.

Imports of EU pork from Spain and Portugal grew considerably during the year, with a 295% and 786% yearly value growth respectively, guided by record high prices that lasted all year.

European pork remains the preferred option for Chinese importers, who value the strong foundations of pig farming in Europe and the high standards for safety, quality, traceability and animal welfare. 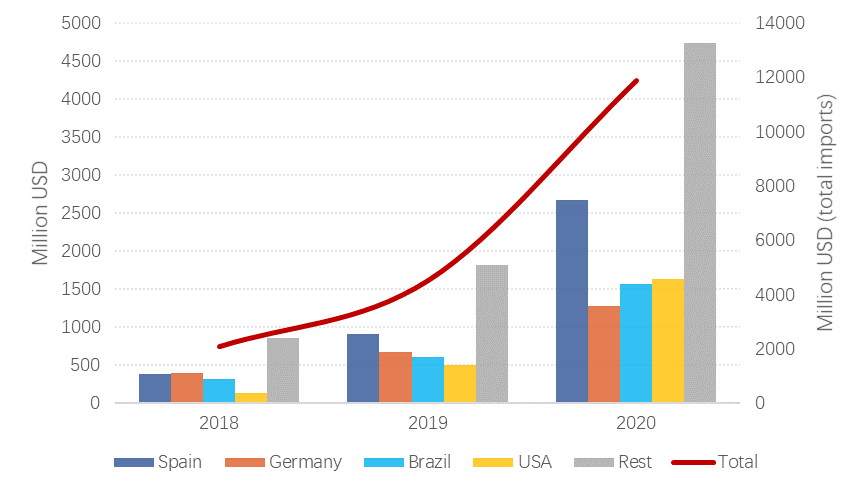 After imports surged to unprecedented levels in 2020, Chinese authorities have raised concerns on food security, and the new Minister for Agriculture and Rural affairs claimed that maintaining stable food production will be a priority under the country’s 14th Five-Year Plan (2021-2025).

The arduous efforts on the recovery of the country’s hog herd has led to a rapid increase of grain imports in 2020, with a 136% growth in volumes of corn imports, a 478% growth in volumes of sorghum, a substitute for corn in hog feed, and a 13% in soybeans, according to GACC, linked to a rapid increase in the demand of animal feed. These increasing need for grains has led China to approve two genetically modified (GMO) corn varieties for imports in early January, and will soon approve another GMO corn variety and a GMO soybean, both produced nationally, for the use in animal feed.

In response to increasing imports, Chinese authorities have declared that they will speed up the drafting of a law on food security this year, to be able to curb the food waste and rely on Chinese grain to feed the population and the growing animal herd.