China’s pork output jumped 28.8% to 52.96 million tonnes in 2021, according to official data from data from the National Bureau of Statistics. This increase shows a recovery of most of the production lost during African swine fever outbreak period. Annual output was just below the 53.4 million tonnes produced in 2017, the year before ASF hit the market impacting production.

Pork output for Q4 came to 13.79 million tonnes, higher than the 13 million tonnes produced in the same quarter a year earlier. It was the highest quarterly volume since the first quarter of 2019, when farmers were slaughtering entire herds to reduce their exposure to tough measures imposed to control the spread of swine fever.

Increases in supply affected pork prices throughout the year, which fell from 50 rmb/kg at the start of the year to 2017-18 levels from June onwards, between 20 and 25 rmb/kg.

The decrease in national pork prices took a toll on imports, which decreased 16.94% in terms of volume and 16.77% in value in 2021 compared to 2020. Despite the negative impact in world imports, Spain grew in terms of market share and exports, with a 17% growth in exports in both volume and value, and 9% market share increase. 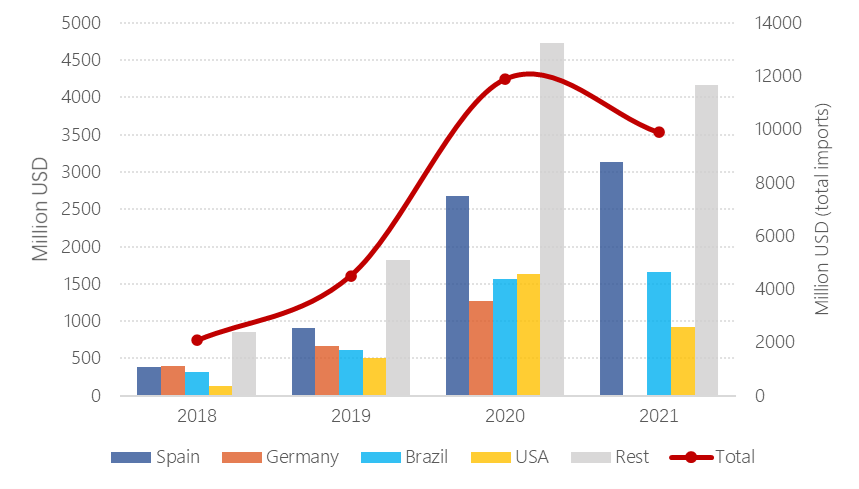 Predictions for imports in 2022 estimate that national pork prices will increase in Q2 or Q3, with an increase in imports in the second half of the year. However, the rebound in prices is not estimated to reach 2020 or early 2021 levels, but to stabilise around break-even point taking into account increased feed costs.