50,000 tons of local pork purchased for the central reserves to stabilise hog and pork prices

Falling live hog and pork prices, together with record high feed prices, have eroded profits for farmers and pork producers in the past months. Most estimates of loss per head in the industry are at 35-50 USD per head, with 10-12 million heads per week marketed, it implies a range of $350-$600 million a week loss in the industry, which many companies cannot sustain. Several publicly traded companies have reported large losses in the first half of 2021, raising concerns among authorities that many others would stop farming, triggering pork shortages in the future.

In order to stabilise hog prices, authorities have used a purchase mechanism put in place in 2009, the “Prevention of Excessive Falling of Live Pig Prices Regulation Plan”. This plan, elaborated by six different ministries, measures the profitability of pig raising and aims at stabilizing pig production and safeguarding the interests of pig farmers when needed.

According to this regulation, there are four levels of pig raising profitability, measured by the pig to grain ratio, comparing the price of live pigs with the price of corn. The ideal ratio stands between 9:1 and 6:1, meaning the price of live pigs per kilo is from 9 to 6 times higher than that of corn for pig farming to be profitable. Between 6:1 and 5.5:1, the price is considered to have dropped slightly and pig farming is below break-even point, but does not require intervention, between 5.5:1 and 5:1, the situation is considered to be of moderate risk and might require some control from the central government; when the national average the pig to grain ratio goes below 5:1, the price is considered to have fallen severely, entering the excessive risk level.

This happened in late June, when the central government and the local governments issued a warning and initiated the collection and storage of local pork for the national reserves, in order to raise slightly the prices and increase the profitability above severe risk level. In total 3 purchases were made after the announcement on June 28th, 50,000 tonnes in total purchased in July 7th, 14th and 21st).

This measure pushed live hog prices up slightly, as can be seen in the graph below at the end of June, and reduced the slump on pork prices, which fell around 5.7% in July, in comparison with a fall of 21%, 15% and 12% in previous months. 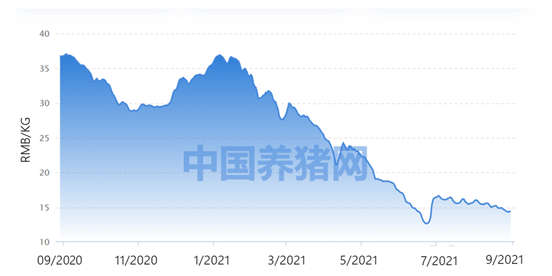 However, the pig to grain ratio has remained below 5.5:1 since the last purchase, on the “yellow warning” level according to the regulation and below the break-even point for farmers, hindering pig farming due to lack of profitability. During the last week of August, it has fallen below 5.1:1 again, triggering a new announcement from the authorities about a new round of purchases. Grains are at record high levels and are not expected to decrease significantly in the short or medium term.

On spot prices for corn are over 2800 yuan per ton (369 euro/ton), 40% more expensive than in previous years, when it didn’t reach 2000 yuan per ton, according to official sources. Soymeal is also 20% more expensive than in previous years, currently at 3750 yuan per ton (494 euro/ton), as well as other feed ingredients. With this situation, live hog prices need to rebound in coming months to reach the profitability level, but the oversupply of pork meat in the market is slowing down the process and keeping prices low.