An introduction to ham carving

The process of ham carving with a knife requires time, dedication and skill. It is very important to be precise about the thinness and size of the slices in order to achieve the best texture and flavour for this highly-valued delicacy. This is an ancient tradition, as knife-cut ham influences and contributes to the tasting experience. Continue reading if you want to learn a few tricks on how to carve a ham like a profes

You need two knives for carving ham. A meat knife to trim the rind and the outside fat and another one to properly carve into slices. The latter is known as “cuchillo jamonero” or ham carving knife.

First you need to secure the ham in the ham stand or “jamonero”, make sure the ham does not move and place it at a convenient height for easy carving. Then the first carving step is to make a cut at the height of the hock to mark it.

This cut is made for two reasons, one so that when we trim the rind, it serves as a limit so we can trim more easily, and secondly to be able to take advantage of the ham meat present there, which many times at home is the last one to be cut and it turns too hard to slice.

Once the cut has been made, we will clean or trim the rind according to the consumption that we are going to make. You have to be careful not to take too much ham and you always have to remove the yellow fat.

Once the part of the ham that is going to be carved is clean from the yellow fat, we simply have to take the ham knife and start cutting. The ham knife always has to be flat and pieces should be thin and not too long, easy to be eaten in one bite. As you progress you will get closer to the bone. Always advance with a steady hand and with the ham knife well held. The knife should be sharp enough so the carver does not have to use any force. The direction for cutting should be to start close to the leg and towards the body of the carver, that way you can avoid carving the wrong shape.

It is important to eat the ham freshly cut, since its flavor is the best then. When you finish cutting, you can place the fat and rind back on top of the meat so the ham preserves its flavors and aromas for as long as possible. It is also advisable to place a cotton cloth over the ham when we are not going to cut it.

The ideal is to keep the ham in conditions similar to those experienced during the curing phase in the cellars, that is, in a cool and dry place. If there are changes in temperature, the organoleptic characteristics of the ham can be altered, such as texture or smell. The ideal storage temperature is between 10 and 15 degrees and always away from objects that generate heat.

The ham should also be kept away from light sources, so neither the leg nor the slices should be exposed to places where there is direct light since, as with temperature, it can cause alterations in its flavor and color.

The ham, being an organic product, should not be wrapped, neither with plastic nor other materials, since this way we are not allowing it to breathe and sweat, deteriorating its quality and causing unpleasant flavors and odors.

If you decide to cut the whole piece or you are one of those who choose to buy the slices cut for convenience, it is preferable to vacuum-pack them in plastic bags and in 100-gram portions.

It is advisable to start the ham in the first two months after having bought it and to consume it, maximum, one month after starting it. It is also important to only cut what is going to be eaten at the moment as it tastes better when freshly cut. If there are leftover slices, they must be stored in the refrigerator covered with plastic wrap and, when they are going to be consumed, take them out half an hour before so that they are tempered and reach their optimum temperature.

It is best to cut the ham periodically, and not leave too long between cutting times, as the outer layers would get hard. If that happens, just discard the fist slices and continue carving as normal.

Following all these steps you will be able to obtain a delicious dish of knife-cut ham, with the perfect combination of meat and fat marbling, to enjoy with friends and family with some bread. 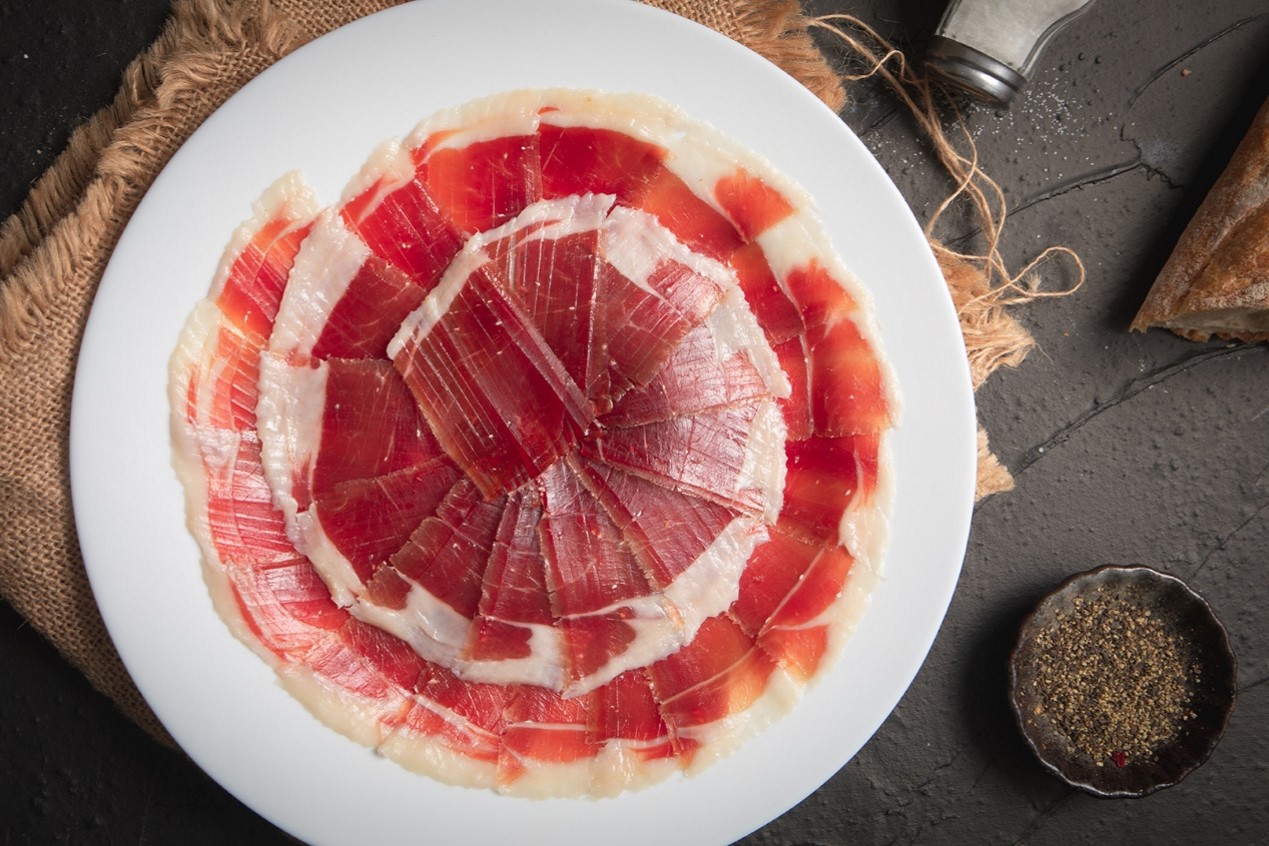