China reported an increase of 31.9% in Q1 pork output YoY, following an increase in the slaughter of pigs, as farmers tried to avoid the risk of disease during the first months of 2021 and sent pigs to slaughter early. Moreover, producers culled inefficient sows during the period, Agriculture Ministry official Xin Guochang declared that the number of sows eliminated at large farms in April grew 18% over the previous month, and 96% YoY, mounting to at least several hundred thousand pigs, swelling pork output during the quarter.

These factors were key in the strong quarterly increase of pork output. Moreover, official data from the Ministry of Agriculture in April shows that sow herd is at 97.6% of the end-2017 level, although experts estimate the overall hog herd to be at 60-70%, which is more in line with the increase of production inQ1. The idea that China’s hog herd has almost fully recovered is inconsistent with the sustained high price of piglets. Prices are still more than four times as much as they were in early 2019. Overall experts estimate that ASF outbreaks in the winter have had an impact in the recovery of the herd, especially in the north. In general, the entire pig production capacity in the country is recovering, and the impact of the latest ASF outbreaks will only reduce the speed of capacity recovery rather than cause a complete reversal.

Pork prices have fallen over 40% since the start of the year, an indication of the large slaughter volume, but this decrease does not imply that the supply is fully back to normal, as there have been several heavy falls and rebounds of live hog prices, indicating a certain level of instability.

Moreover, frozen pork reserves were accumulated from October to February, and a release of reserves during this quarter was another factor affecting the excessive fall of prices, China is entering a period of low demand during summer, which indicates that current prices might be sustained, although there may be a slight rebound during June due to the excessive fall in previous months. 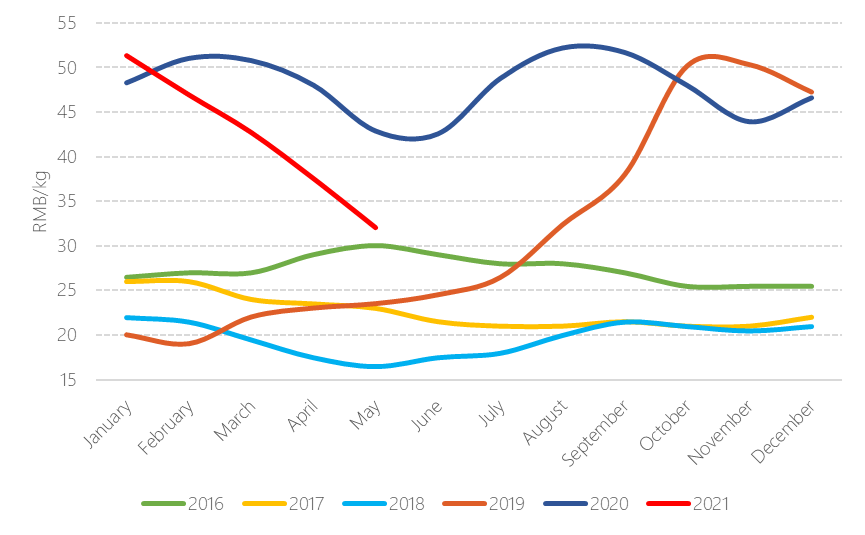