The Chinese market has been fluctuating following one of its usual deep cycles of very intense highs and lows. After the unexpected rise in supply of the first three quarters of the year, which pushed down the prices, the industry felt heavy losses, triggering massive sow and hog liquidation, which pushed supply higher and prices lower. This has led to a contraction of the sow and hog herd, stabilising prices again as demand rises with the winter months.

Publicly owned stock market producers have been reporting heavy losses. During H1, with average price of hogs in China about 22 RMB/kg, one of the companies reported 500 USD million in losses. During Q3, prices fell even lower to an average of 11 RMB per kilo, with estimated loss amounts between 100 and 200 USD per head, unbearable for many producers, who could not cope with high-feed and labour costs. 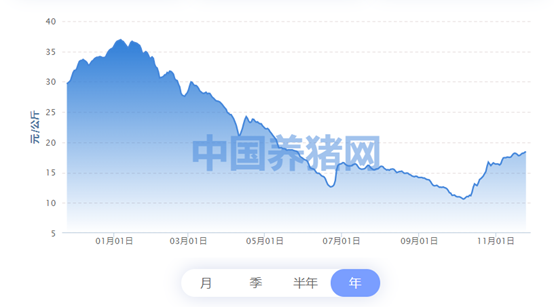 These losses led to large sow liquidations across the industry, with the price of culled sow as low as 2 rmb/kg in some areas during October. Slaughter weights also dropped by 20-30 kg from the start of the year, a sign of the tightness in the budget and producers taking heavy losses, which meant they could not afford feeding hogs for longer.

According to official figures, sow inventory fell every month since July, with some experts estimating the sow liquidation on 4 million in September, flooding the market with meat and pushing prices down. According to official data from the Ministry of Agriculture, sow herd fell 0.5% in July, 1% in August and 2.3% in September, the last month with information available. Experts estimate that sow liquidation continued in October and November but is slowing down as prices rose. Following a recent study by the China Feed Industry Information Network, the biggest 100 pig producing companies (with over 10,000 sows) are currently not producing at full capacity, with an average sow inventory of about two-thirds of the full-load inventory.

Sow liquidation during 2021 will lead to lower hog and pork output in 2022, which could benefit exporters worldwide and trigger another phase of the pig cycle within China.