Live hog prices in China have fallen rapidly in recent weeks. Official data shows the country’s prices registered a week-on-week decline since late October. During last week (December 12-16), the average price of pork tracked by the Ministry of Agriculture and Rural Affairs was 25.76 yuan (3.47 EUR) per kilogram, down 11.1 percent from the prior week. One of the reasons for this decline is that pig farms expected that the price would rise in December, so there was a large backlog of fattened and secondary-fattened pigs slaughtered this month. The falling price has spurred further slaughter as farmers seek to sell off hogs before prices go even lower. 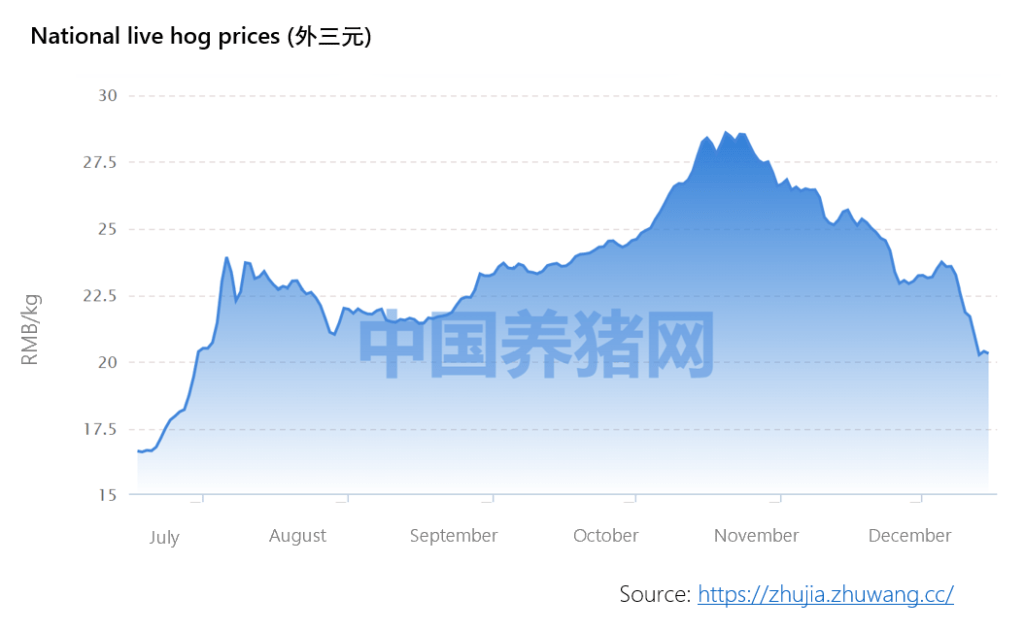 Moreover, since September, Chinese authorities have released seven batches of pork from central reserves into the market, and urged local governments to further increase pork releases, reflecting the government’s attempt to maintain the stability in the market.

Farmers are rushing to send large amounts of pigs for slaughter to meet demand before the Lunar New Year festival in January, but they are finding that consumption is not as strong as expected; it is only slowly recovering since the government eased COVID-19 restrictions around the country, causing a peak in cases and disruptions. An increase in hog supply at the end of this year is causing the recent decline in live hog prices.

The growth rate of China’s pork production has slowed recently since increasing every quarter year-on-year for the last two years, as some farmers reduced their breeding herds late in 2021 and earlier this year after months of heavy losses, with low hog prices and high feed costs eroding profits.

Based on USDA estimations, pork production in China is expected to reach 51 million tons in 2022, an increase of 7.37% over 47.5 million tons registered last year, while expectations for 2023 are to achieve 52 million metric tons (another 2% increase). High feed costs in China are expected to reduce incentives to over-fatten hogs (i.e., “second fattening”, a practice in which standard weight hogs are retained for additional fattening by intermediary producers), which can also push production in the upcoming year.