Weak imports during the first 5 months of 2022

China’s pork imports remained weak for the first five months of the year, following low local prices. From January to May, YoY variations per month were around 60% fall, taking into account both meat and offal.

Meat products have been more heavily affected, with imports falling 65% in terms of quantity and 75% in value for the 5-month period, in comparison with the same period in 2021. Swine offal has also taken a hit, with a 15% reduction of imports by volume and 12% by value.

A total of 1.14 million tons of pork meat and offal were imported into China during the 5-month period, valued at 2443 million USD. Out of these, 680 thousand tons correspond to meat products, and 460 thousand to swine offal, valued at 1366 million USD and 1078 million USD respectively.

Spain remains as the first origin of Chinese pork imports, followed by Brazil, Denmark, Canada, the Netherlands and the US. 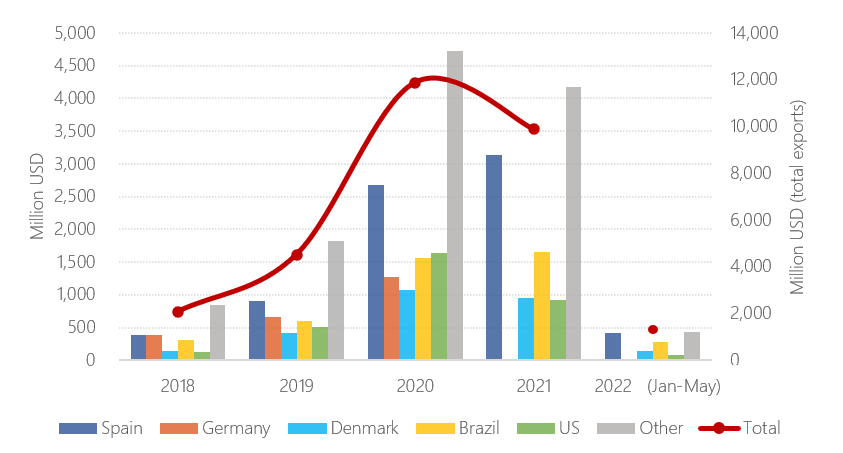 Low local prices and sluggish demand due to COVID-19 lockdowns that affected the supply chain and horeca channel are the main reason for the decrease on imports. However, weaned pig prices have always been seen as leading indicator of the hog market to come, and prices have been rising since March, with a 62% increase in 3 months.

With hog and meat prices rising in late June, and especially in early July, where they now sit at 23 RMB/kg for live pigs and 30 RMM/kg for pork,  imports are expected to grow moderately during the second half of the year, to prepare for the higher demand season starting with the October holidays in the country.